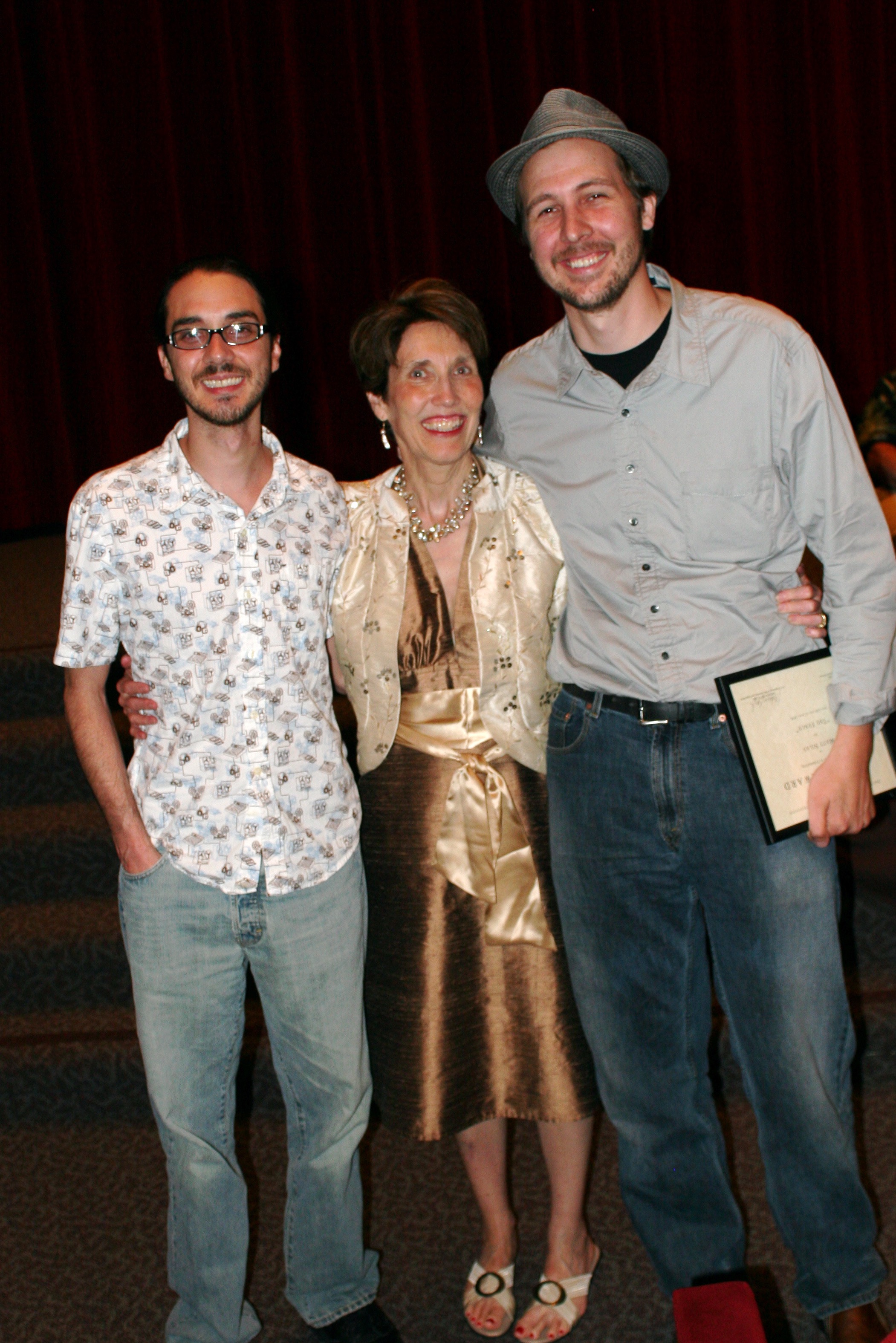 My son, Matt Silas, receives Director’s Award at UCLA Film Festival in 2008 for his short film, “The Fence,” based on a chapter from my novel, Hardpan

Here’s are two excerpts from Part I, Chapter 6, “The Fence,” in which two young girls, Linda and Jean, are dropped off by their father at a field across the river to keep the sheep away from a stretch of broken fence.

“When will you pick us up, Daddy?” Jean asked. “After mowing?”

“Don’t forget us!” Linda shouted at his back as he leapt across the dry creek bed to his pickup.

He glanced around. “I won’t. Now remember, girls. Keep the sheep away from that hole in the fence.”

“We will, Daddy.” Like cowgirls entering a rodeo arena on horseback, they waved in unison.

He spun a U-turn back to the ranch. Gravel scattered everywhere. The billowing dust cloud thinned gradually to a single horizontal band wafting over the road.

Linda squeezed Jean’s small hand. It felt clammy. She wondered how they would keep the sheep from crossing the road if the herd came their direction.

Linda saw the dust cloud of the oncoming car first. “It’s coming from Belfry. We’d better hurry. I don’t want to miss this car!” Linda shoved leftover sandwich pieces into the pail and stood up to flag down the car. The car was finally in sight.

They yelled and Jean waved the red kerchief until the car rolled to a stop. A scrawny man about as tall as their father stepped out of the old green car. He wore Levi’s and a long-sleeved, plaid shirt with pearl buttons. He took his time coming around his car to the girls’ side of the road. He looked their father’s age, in his thirties. But his face was weathered and his cheeks caved in, as if he needed a home-cooked meal more than a job.

“Could you tell us the time?” they asked.

The girls stood together on the other side of the dry ditch, in front of the broken fence, several feet away from him. He stood still, closely inspecting them. His sunken cheeks were lined with deep creases. His thin lips looked stuck together by glue. Linda began to feel queasy over his long silence.

“The time? You don’t know it’s past noon already?” he said at last. He pulled a round watch from his front pocket.

He picked up the conversation, shifting to a voice so soft they could barely hear. “How’re you girls doing today?”

As the man tugged at the giant, round, silver buckle on his leather belt, Jean sidled up to Linda. He pulled the belt loose, leaving the giant buckle dangling in front, and started to unzip his Levi’s. Linda’s mouth suddenly felt parched, as if the hot summer sun had baked all the moisture out of her.

”Wanna see?” he asked. His lips barely moved as he folded his right hand over his open Levi’s.

Linda shivered. It hit her that he was doing something bad. This man shouldn’t be unzipping his pants in front of girls like her and Jean. Beads of sweat fell off the tip of her nose. She gazed away from his hands to his feet. There were cracks in his worn pair of leather cowboy boots. A big dirt clod stuck to one heel.

Maybe he was one of those drifters her mother talked about. She remembered her mother saying drifters were men who didn’t have families and came to Wyoming in search of work on the ranches each summer. Her pulse thickened. She grabbed Jean’s hand for reassurance.

“Hey, no reason for you girls to be afraid. I can take you home. Where do you live?” he said.

“Go away! We don’t like you. Anyway, Daddy wants us to watch the sheep today so we can’t go to our house now,” Jean said.

“Stop it, Jean!” Jean said too much, as usual. Linda raced through the possibilities. Could they run to the Badura’s or the Kowalski’s? The midday heat reflected from the roof of the Our Lady of the Mountain Catholic Church where they sometimes went on Sundays. The church perched on the hill behind the Badura’s ranch compound. But it was too far away, and they would have to cross the ditch in front of the man and his car first.

“Why don’t you get in?” the man said, motioning toward his car.

…find out what happens in the book!